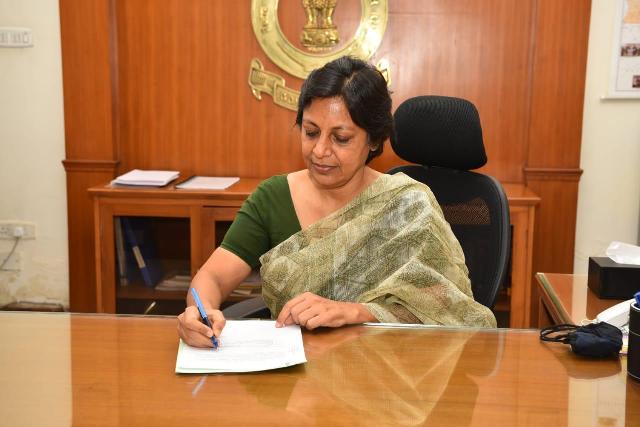 Chandigarh, June 26- Vini Mahajan on Friday took over as the first woman Chief Secretary of Punjab, marking another milestone in an illustrious career which is notable for many landmark achievements.

A 1987 batch IAS officer, Vini has replaced Karan Avtar Singh at the prestigious post, where she brings to the table 33 years of experience in a host of key positions in the Central and Punjab governments. Karan Avtar takes over as Special Chief Secretary, Governance Reforms.

The only Punjab cadre officer currently in the state who is empaneled to hold position as Secretary, Government of India, Vini was till now serving as Additional Chief Secretary, Investment Promotion, Industries & Commerce, IT and Governance Reforms and Public Grievances. She has been playing a crucial role in steering the state government’s response to the Covid crisis as Chairman Health Sector Response & Procurement Committee.

An Economics graduate from Lady Shri Ram College, Delhi University, and a post-graduate from the Indian Institute of Management (IIM), Calcutta, where she was placed on the Roll of Honour and later also received the Distinguished Alumnus Award, Vini was pivotal in the state’s success in attracting over Rs 20,000 crore new investment every year during her tenure in Investment Promotion and Industries & Commerce.

In fact, it was with her at the helm of the department that Punjab participated for the first time in the World Economic Forum at Davos in 2019, and held a highly successful Investor Summit, with focus on MSMEs, in December 2019.

Under her able leadership, the department saw massive improvements in infrastructure in the focal points, and new mega Industrial Parks were also taken up. A Centre of Excellence and several incubators were launched for promoting and mentoring start-ups, and recently, as part of governance reforms in the State, a completely new Public Grievances Redressal Policy was launched with her pioneering efforts.

It was during her tenure as ACS Housing & Urban Development, that the development of a 5,000 acres new township near Mohali Airport was initiated. Further, during her term as Additional Chief Secretary Revenue, Punjab became the first state in the country to roll out the National Generic Document Registration System.

Vini Mahajan served in the office of the then Prime Minister Dr Manmohan Singh from 2005-2012, and handled, matters relating to Finance, Industry and Commerce, Telecom, IT, etc. She was part of the core team of the central government that put together India’s domestic response, during and following the global financial meltdown. She also participated in the global response through the G-20 mechanism.

Earlier in 2004-05 as Director in the Department of Economic Affairs, Ministry of Finance (GoI), she was involved with India’s external assistance programme, as well as infrastructure issues.

In Punjab, she has served in various capacities, including MDPIDB and as the first Director Disinvestment. She was appointed as Chief Administrator of the new Anandpur Sahib Development Authority in 1997, and also CEO Anandpur Sahib Foundation, for the organisation for the tercentenary celebrations of the birth of the Khalsa held in 1999. She served as the Chairman of the Celebrations Committee for the 550 year celebrations of Guru Nanak Dev ji in 2019.

In 1995, she became the first woman officer to be posted as DC in Punjab, when she took over as DC Ropar, in which capacity she carried out a highly effective Total Literacy Campaign, for which Ropar received the National Literacy Award for best performance in the country.

Vini Mahajan has received numerous academic awards, including the National Talent Search Scholarship. She was a Hubert Humphrey fellow based at American University in Washington DC in 2000 –2001. She could be the only student in the country who got admission to both IIT and AIIMS Delhi in 1982 after she finished her 12th grade from Modern School, New Delhi.

Her father, Shri BB Mahajan, was also an IAS officer of the Punjab cadre. Topper of the 1957 batch and known to be a man of integrity, he held important positions, including FCR in Punjab, before retiring as Secretary Food, Govt. of India 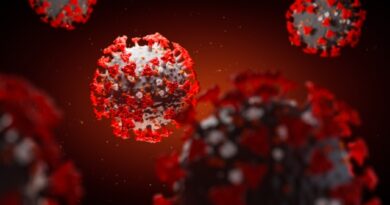 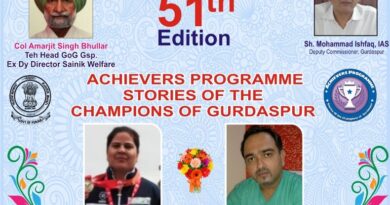 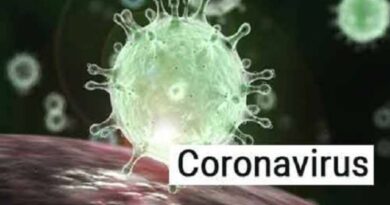